I’m back in California, fresh, well, sorta, off an eight day trip back to the city of my birth. I say, “well, sorta” because I now have an annoying head cold, accompanied by some rather unpleasant chest congestion. It could be due to the barefoot (I fucking hate that, and I don’t mean he was wearing socks, just his ugly bare feet, ugh) asshole sitting across the aisle from me on the flight, who besides wheezing and coughing almost non-stop for the entire flight and pounding back Alka-Seltzer Cold Shit, refused to turn off his cell phone even when the official “Please turn off all electronic devices” call came, instead hiding it when one of the flight attendants came through. Now, I don’t know what the “electronic devices” interfere with, but I also know I don’t wanna find out. Something in me refused to allow me to snitch, but I did wanna smack him across his smug Modern Dad mug. Man, did he bug me! Barefoot fuckhead! Anyway, how are you? That’s good. Good to hear.

The main mission was more work on the upcoming Del-Lords record, which I am happy to report went just great. Five more tracks for us to build upon, and that brings the total to ten. I figure a few more and we’re there. We recorded out at Cowboy Technical Services, Roscoe’s studio in Williamsburg. It has to be my favorite place I’ve ever recorded, on a par in a different way, to the late great Coyote Studios, where we all worked extensively during its lifetime and which, in fact, started out of our old rehearsal space in the Music Building on 8th Avenue, just south of the Port Authority. Cowboy Technical Services has a great vibe, great sound, and everything is just as you would want it but would normally need at least two days to get it that way before you play one note. 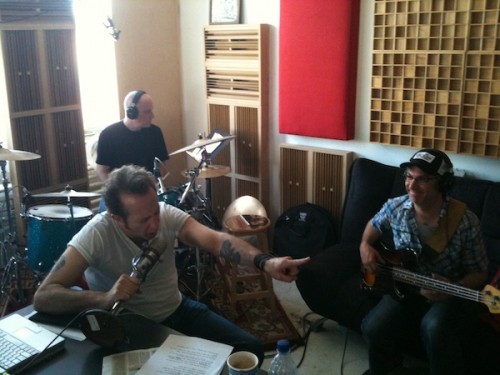 Frank just keeps getting better and better. I have learned that when the question goes out about which song we wanna work on next, if Frank has an opinion, go with it. It means he’s thought it through and he’s gonna nail it before you know what hit you. He was spectacular. Plus, he always brings cookies!   The tracks we recorded were DAMAGED, YOU CAN MAKE A MISTAKE ONE TIME (title might get shortened), LETTER (UNMAILED), CHICKS, MAN! & EVERYDAY.

EVERYDAY is a song I wrote with Dion back when there was a proposal on the table for a bio pic of him in the works, with a screenplay by Chazz Palminteri, and Chazz as director, as well. The song was written for the scene when they get to the hotel the next morning in Moorhead, Minnesota, where they all learned of the fatal plane crash that killed Buddy Holly, Ritchie Valens, & The Big Bopper on the Winter Dance Party tour of 1959. Everyone is in a state of shock, and Dion, who was entrusted with Buddy’s guitar (Buddy had told Dion, “Take care of it like you take care of your testicles”, to which Dion thought, “I never heard it put that way before, but I knew what he meant”) opens the case, and in his haze starts strumming it, trying to remember that song, EVERYDAY, that Buddy had played the night before. Not being able to clearly remember it, this song is what came out. Some dramatic license, to be sure, but it’s a heartfelt song of friendship.

MISTAKE is a song I wrote based on a great Eric Ambel riff that sounds a bit like what Led Zeppelin would have sounded like if they were actually American. Oh, and with me singing. Use your imagination. I can tell you that the marriage of the song and Eric’s newly acquired Les Paul reissue was a match made in Guitar Heaven.

DAMAGED is a down the middle Del-Lords style rocker. I once heard someone say that it’s gotten so the first thing I ask a girl when I meet her is, “Hi, what did your daddy do to you’? It stuck with me, and I thought it would be a fun idea to build a love song around. Something about it reminds me of NRBQ, musically at least. They’re one of my all-time favorite bands, and Terry Adams is a friend of mine. In fact, I saw him a few months ago up in San Fran with his new band, who are fucking awesome and a worthy successor to the now defunct, after 40+ years, NRBQ.

LETTER (UNMAILED) is a vow of love that I never got to speak to someone who probably would not have reacted favorably to it anyway. I put it in a letter and it remains unmailed. I think I wrote this almost 20 years ago. Yes, the romantic side of the Del-Lords.

CHICKS, MAN! is a frantic rock’n’roll song based on a country blues lick and amped up to (at least) 11. Breakneck speed and guitars, guitars, guitars. Kinda Punk Blues, perhaps. Lyrics are kinda funny, unless you’ve lived through this, then it’s like SPINAL TAP was to Steven Tyler, “Man, that movie was not funny, not fucking funny at all!!!” Got me?

Eric did another fantastic job arranging, playing and producing, with all his ideas advancing the songs and upping their impact. His overview was and is essential, and for me, as the main writer, Eric gives me more confidence than perhaps I deserve, but I sure do need it to be able to do my job. What a great musician he is.

Thanx to our old pal, Steve Almaas, who played some bass, although a family emergency called him away before we could complete more than one track with him this time around. I actually first met Steve in Minneapolis when his band, The Suicide Commandos and The Dictators shared a bill the night the news of Elvis Presley’s death broke. I believe it was August 17th, the night after his actual passing. An unforgettable night. But, Eric called on Jason Mercer, who came in the next day and was fantastic on those low notes, and we were able to nail another four songs with him. Thanx to both you guys for your great work and presence. A big hand, and a loud shout-out has to go to the great Mario Viele, who engineered, caught every note we dropped, and answered the call above and beyond his already daunting task. Thank you, Mario.

As always, it was just great being with Frank and Eric again, as we have such a strong, unshakable bond, and a shared sense of humor, that exemplifies why it’s called “playing” music, and not “working” music. It fills the heart and soul and I am our biggest fan. There is no one on Earth I would rather make music with, and that feeling only grows as time goes on. Don’t think for one second I don’t know how lucky I am just to know them, let alone have them play my songs. I am really excited and adrenalized about the new record, the band’s new lease on life, and the future. I have a real pet peeve about musicians who DON’T get better with age and experience (they shall remain nameless), and I can assure you that is NOT the case with Frank and Eric. They were always great but now are exponentially greater. I mean, getting older has to count for something, fer cryin’ out loud! As a result, I have no doubt this record will be the best thing we’ve ever done. Can’t wait to get this thing out to you guys.

If you wanna hear more about the prodigal son’s most recent return home (yes, there’s more), check out my forthcoming blog on my own site, scottkempner.com. In the meantime, be well, stay strong, and remember we are our brothers’ and sisters’ keepers, no matter what you might hear out there to the contrary.