A LITTLE CATCH-UP FROM DEL-LORDSVILLE U.S.A.

Finally we are emerging from a tough 2014. For Frank it was elbow surgery. For Eric, some neck and shoulder issues. And for yours truly, some shoulder surgery. Steve Almaas remains fully intact. Let this communiqué serve as a brief catch-up on what is going on band-wise, as despite the battle scars, injuries and recoveries, there was action.

We have recorded what we call “maps” of about a half dozen songs for what will be a part of a new Del-Lords record. We will be returning to them over the next coupla months. In the interest of full disclosure, a song “map” is essentially a guitar/bass/ drum machine demo of a complete song from which we can build a complete song with the band.
Eric has, as always, been busy producing, playing and writing, all while perfecting his slow cooker cooking skills. Perhaps you have seen some of the excellent gourmet results by way of his FB posts. Frank has been rehabbing that elbow, easing himself back into drumming, as he works his way from cool calm rock music to the whirlwind and endurance-testing, high-velocity rock’n’roll that is our own band. My shoulder is coming along, and although I still have many months before my recovery is considered complete, I am already feeling up to the task at hand. And Steve? Well, Steve is just fine and waiting (almost) patiently to strap on the four-string, low-tones machine and get down to it.

Over the coming weeks, we will let you know about live dates as they come in. We are also gonna release a live single we had recorded before everyone succumbed to battle injuries and subsequent healing processes. More on that to come, as well. Eric has started a new solo record of his own with the great Jimbo Mathus producing.

While we were first working on ELVIS CLUB, Gary Borress (of GB Music, the label that released ELVIS CLUB, as well as the reissue of my first solo record, TENEMENT ANGELS) came across a live recording of a solo show I had done way back in 1993 online. Gary dug it, thought that with some mastering and maybe an edit or two that it was something we should consider releasing ourselves.

It’s a live recording of one of the very first solo acoustic shows I ever did. I had been on the road with the great Skeletons as my band, when suddenly the funds from the label that had originally released TENEMENT ANGELS, and had been putting up the money for the band, had run out of do re mi, and the band was left with no choice but to back out at that point and head back to Missouri. I was suddenly a solo acoustic artist. It was by necessity, and not by choice. Of that, you can rest assured.

Well, be that as it may, I agreed with Gary that the show he found was pretty darn good and made for an entertaining listening experience all these years later. So it is that LIVE ON BLUEBERRY HILL is now available for one and all to dig – if you so choose. The solo format gave me a chance to sing, for the first time, some songs that Eric had sung, and on which he had left his own indelible mark, as well as refitting other songs for the solo format. It was recorded in St. Louis, a town that looms large in Del-Lords lore, and the audience was great, and ready to participate and help me out if the going got rough. You can get it on my website, the GB Music website, some of the cooler record stores, and even on iTunes. Give it a listen, friends.

In closing, I want to once more remember our hero, Lou Whitney. Lou passed away back in the Fall, and the hole his passing left is gigantic, and will never be filled. I know that each of us can speak to our love for Lou, as well as how much we learned from him, how much we valued him, and of course, how much we miss him. He was the band’s Godfather, our producer, our guru, and mentor. He was crucial in Eric’s development as a producer – something from which we all have benefitted – and Eric could elaborate on that better than I could. Lou taught me a ton about songwriting. Lou Whitney was a guy who could teach without you knowing you were being schooled, who could make you laugh, and leave you thinking about it to the point that you realize you had learned something valuable even while you were laughing, and was even something of an unwilling, accidental Holy Man. Everything we do from here on out will be dedicated to our great friend, with more than just a passing acknowledgement of the Greatest American Band you might not know, The almighty Skeletons, especially Donnie, Lloyd, Joe Terry, Rongo, and Kelly. And, a forever hug and kiss for the eternally lovely Kay Whitney. From the Del-Lords to all of them, much love, much respect, and much gratitude. Lou Whitney: NEVER TO BE FORGOTTEN! 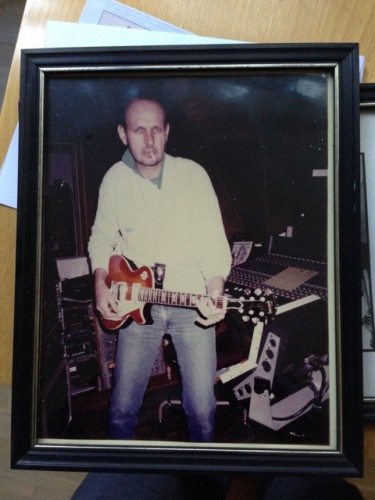 1 thought on “A LITTLE CATCH-UP FROM DEL-LORDSVILLE U.S.A.”